John O’Groats to Lands End in a Bathtub 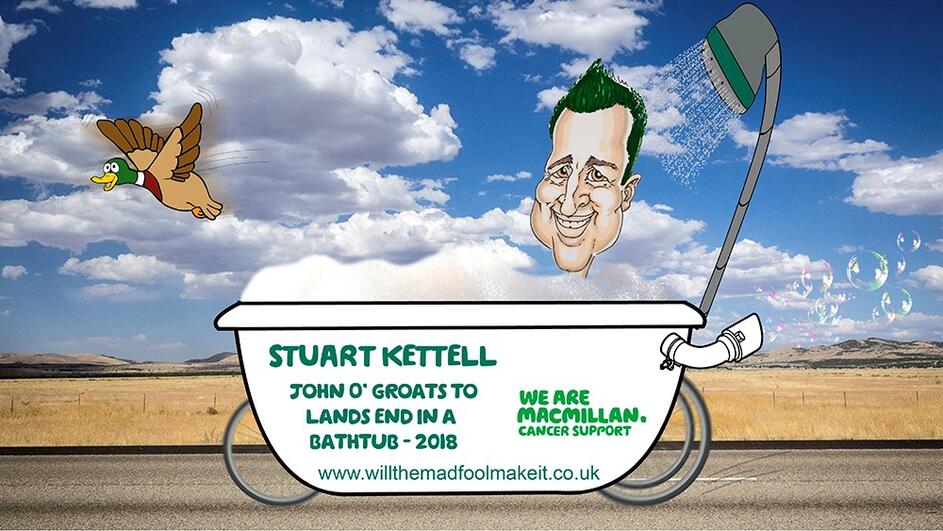 Next year, in aid of Macmillan Cancer Support, Stuart Kettell will embark on a 1000 mile journey between John O’Groats and Lands End. However, there’s a usual detail in the plan for this journey: Stuart will be making this trip inside a bathtub. Whilst a conventional bathtub would certainly grab people’s attention, an ordinary bathtub might not get very far. Stuart’s bathtub though, will not just be an ordinary kind of tub. Stuart’s bathtub is one that benefits from the incorporation of a recumbent cycle. The bathtub itself has been donated by Bathroom City while the pedal-powered Kettweisel recumbent cycle has been provided by Kinetics Online in Glasgow, who is also responsible for the cycle being integrated into the bathtub. Making this venture even more eye-catching is the fact that accompanying Stuart’s bathtub-cycle hybrid will be a rubber duck and an exhaust pipe pumping out mounds of bubbles as Stuart pedals away.

No stranger to charity fundraising, Stuart Kettell has put himself forward for a number of other challenges to raise money for Macmillan Cancer Support in the past. These fund-raising efforts have often been of a slightly wacky nature and have included walking every single street in Coventry on a pair of stilts in 2013, completing 7 marathons in 7 seven days in a giant hamster wheel in 2011 and 2015’s popping of 10 000 balloons on a pogo stick. And, as a result of his efforts to generate money for Macmillan Cancer Support, Stuart has so far raised a sum of £50,500 for the charity. Following a two year break from activity due to a Mitral Valve leak in his heart, Stuart is back on track after his surgery in the latter part of this year and is fully focused on training for his forthcoming bathtub odyssey. 16th September 2018 is the day that this fundraising journey begins.

And with his onboard tracker, you can follow Stuart as he gradually makes his way to his destination. Stuart took the time to contact us about his charity work in aid of Macmillan. When asked what the greatest difficulties are that this challenge presents, Stuart replied: “The hardest thing with the bathtub challenge from John O’ Groats to Lands End is definitely going to be the hills…”, comparing the bathtub to being like “carrying an additional passenger who is not pedalling.”

Stuart told us that he has been raising funds for MacMillan for 11 years and explained that the reason he decided to make his challenges a little more unconventional was due to the increased media attention that they created. He feels the challenges have helped make people more aware of the way in which Macmillan provide support to cancer patients and their families. His inspiration to raise money for Macmillan Cancer Support came after being amazed by the kind of work that they do. It was through filming patient case studies for the charity and witnessing the support they provided to friends of his, that Stuart was able to see the difference that Macmillan can make to people’s lives. Stuart has a difficult task ahead of him. It goes without saying that his journey from John O’Groats to Lands End promises to be strenuous and will require a great deal of determination. However, with his history of completing physically demanding challenges for worthy causes, we can be sure that Stuart is definitely capable of making his latest charitable venture a success.