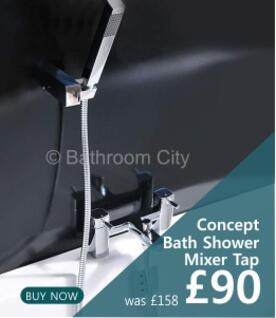 For those who want something a little more contemporary then opt for minimalist options with bold geometric or futuristic-inspired designs that will truly make a bold style statement.

Bathroom City has a wide range of beautiful bath shower mixer taps to explore from value ranges right through to premium luxury brands such as Crosswater, Arcade Collection and Imperial Bathrooms.

Bath shower taps are an ultra-functional complement to any bathroom suite, allowing a solution to bathing and showering in one easy to use design.

Many bathrooms are too small to accommodate both a bathtub and a separate shower cubicle. The solution is a bath shower mixer tap, which transforms your bathtub into fully functional showering space. These bath taps include a built-in shower handset and enable you to either run a relaxing bath or enjoy an invigorating shower depending on your requirements. 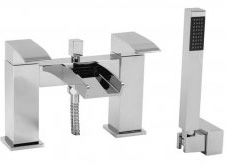 With a huge selection of bath shower mixer taps on the market, including a deck mounted and wall mounted bath taps, it is vital that you choose one that is suitable for the type of bath you have. Deck mounted taps that attach directly to the bathtub can require anything up to five tap holes to accommodate the handles, diverter, spout and shower handset. 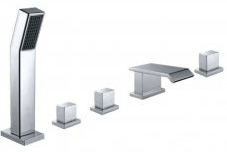 Extra holes can be drilled into acrylic baths to accommodate your tap choice however you cannot drill stone and cast iron baths. With such heavy materials you are limited to using any existing holes or if there are no holes then you can choose a wall mounted or floor standing models.

A beautiful bath shower mixer tap can become a focal point in itself so you need to make sure it complements the overall style of your bathroom installation. A classic bath shower mixer tap with cross-head handles and traditional shower handset with the cradle is the perfect way to capture the elegance of yesteryear.