History of Bathrooms: Greek & Roman to Modern | Bathroom City
Free Delivery Over £499 orders to most of UK*
Showroom Open 7 Days a Week Visit us in store!
Rated 4.2/5 on TrustPilot! Read our customer reviews
0% Interest Free Credit for 4 Months On Orders Over £99 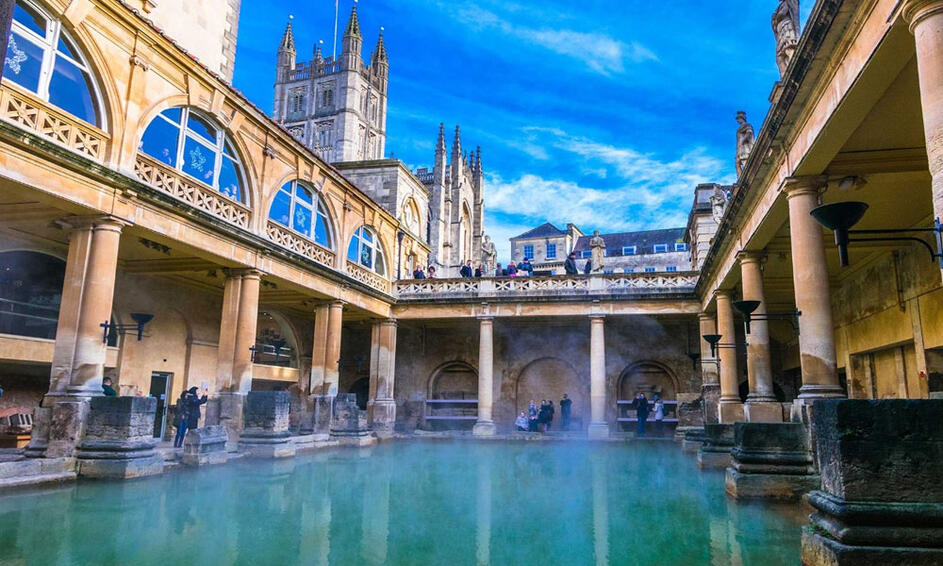 Have you ever wondered how modern bathrooms came to be? Records show that our love of bathing dates as far back as 3000 BC – a time when water had significant religious value for its perceived ability to cleanse and purify. Indeed, baths were very much a part of community life at this time, whether you look to the hot steam baths of Europe or the cold mineral baths of Asia.

Today, we often associate the bathroom with comfort, privacy and luxury. But it wasn’t always the case. We have centuries of civil engineering, sanitation and social change to thank for our hot water, flushing toilets and adequate ventilation. Keep reading to learn more about the history of a room that is all too often taken for granted.

Communal bathing formed an important part of citizens’ lifestyles in Ancient Greek and Roman times. In fact, the writer Homer often had his heroes bathe in warm water to regain their strength and invincibility. The earliest surviving bathtub was discovered at the Palace of Knossos in Crete, and dates all the way back to 1700 BC. Not only that, many other Greek palaces also had areas with surprisingly sophisticated drainage systems for bathing.

Of course, we are all familiar with the Romans’ love of bathing, and in particular with the large thermal bath ruins that can still be seen today at Thermae Bath Spa in Bath. These baths were used not just for washing and relaxing, but also as a place to socialise and share news. Early Republican bathhouses would have had gender segregation, but by the 1st century AD, mixed bathing was much more commonplace.

A Brief History of Toilets

Contrary to popular belief, Victorian plumber Thomas Crapper did not invent the flushing toilet. In fact, the flushing toilet was invented in 1596 by Sir John Harrington, famously nick-named as the "saucy Godson" of Queen Elizabeth I. The British Museum has written a great article on the history of the flush toilet. The first practical water closet came later in 1778, thanks to Joseph Bramah of Yorkshire.

So who was Thomas Crapper? Crapper was in effect one of the first bathroom salesmen – he set up public showrooms displaying sanitary ware. He’s often hailed as an advocate of sanitary plumbing and one of the first to popularise the idea of having a bathroom inside the home.

Indeed, what we might consider the ‘modern’ bathroom did not come about until the late 1800s, once civilisation had achieved adequate sewer systems, hot and cold water, indoor plumbing, and the invention of the flush toilet and stationary bathtub. These were a far cry from Roman public toilets – filthy places with poor lighting – and indeed Medieval toilets: public latrines built into bridges so the waste would simply fall into rivers and waterways.

What about toilet paper? Joseph Gayetty is widely thought to be the inventor of modern, commercially available toilet paper, which was first introduced in 1857. Before toilet paper, the Ancient Romans usually opted for a sponge on the end of a long stick, which was shared by everyone.

In the 1300s, King Edward III was the first monarch to install a bathroom in the Palace of Westminster. Until that point, people had mostly made do with wooden tubs in their bedrooms. Even later, in the 1500s, bathrooms were still rare – but Henry VIII had one at his palace at Hampton Court, complete with a boiler for hot water. It wasn’t until the mid-1800s that middle-class families started building bathrooms in their homes: an option that becomes much more viable after the invention of the gas water heater in 1868 and the electric water in 1889.

The 1800s also saw portable metal bathtubs coming in to replace wooden ones, and in some cases, even hand-pumped showers. It was in 1883 that a man named John Michael Kohler created the world’s first proper bathtub – a cast-iron horse trough with four decorative feet, which he coated with enamel.

The Invention of Showers

The Greeks technically invented the first form of a shower – a device that sprayed bathers with water. But it wasn’t until 1767 that an English man named William Feetham invented what we now know as the first modern shower.

Then, in the early 1800s, the first designer shower – The English Regency – was invented anonymously, made from a metal frame painted to resemble bamboo. In the Victorian era, wealthy households started building splendid bathrooms – some with very elaborate shower attachments. But they took some time to catch on – showers did not become a staple of British bathrooms until the mid-late 1900s.

After learning about the history of various Bathroom essentials, feel free to view our extensive and affordable range of Toilets, Baths & Showers.

Hopefully, you learned a thing or two today about the history of bathrooms. Remember, for affordable bathroom furniture and supplies, look no further than Bathroom City.